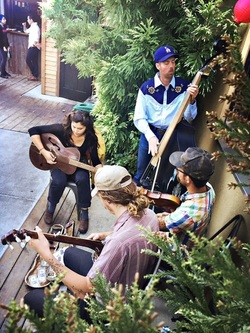 SEAN SKAIFE: Sean is from the deep hollars of Claycord, CA. Influenced by the sweet sounds of mulberry branches and that golden California sunshine. Sean is said to play a unique style of "primitive" fiddle that gets the crowds going. Sean is also an accomplished multiinstrumentalistmen.

Nick Shoulders: Mr. Shoulders grew up in what civilized people could only call backwoods Arkansas. You've heard of Okies, but what we have here is a died in the wool, barefoot Arky. You know you have nick on the banjo when you can't tell if you are living in 2016 or hearing the sweet melodies from a land where hillsides fold in on themselves and haints are all too real.

Lane Cunningham: Lane, AKA Cadillac Lane got his start with music early on. The few times you hear him chime in on vocals you can hear the influence of the cold, crisp fall mornings getting ready to bird hunt with his dad and beloved dog shiloh. They all sang along to a clint black album in an American made chevy truck. If you think a freight train is bearing down on you while you are listening to the Sons of Liberty, don't fret it's just the bass stylings of Cadillac Lane.

Chelsea "Cheech" Moosekian: This band could not be near complete without the chunk-a-doodle guitar work that Cheech puts forth. You'd think this girl was baptized by gods right hand man himself. If you smell a orange flower with dew on the pedals when you hear Chelsea sing old sal has mud on his keys then you wouldn't be far off. Cheech has roots that go far beyond her childhood home in Thousand Oaks, a voice like no other, you won't want to miss out on hearing big daddy belt some tonkers.

Mike Lewinski: Mike is our resident square dance caller and can also fill in on any instrument you put in front of him. He adds a flair to the music that is completely vibey. You might not know what I'm talking about, but just you wait and see. Mr. Lewinski grew up listening to Karl Marx on the AM dial and gets his musicianship from a fellow old time musician in our sister band Bad Religion. You might feel bad for Mike but please don't get him drunk.